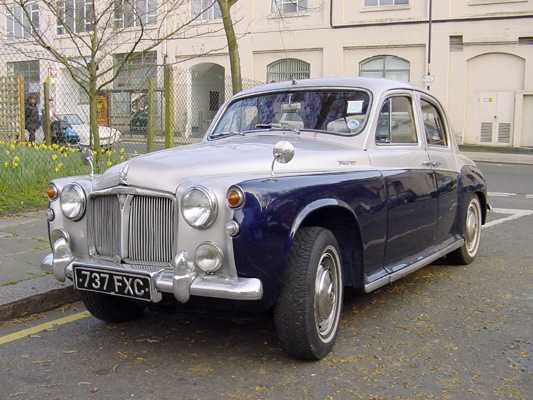 An amazing but true story!

Earl has pretty much always driven a Rover P4, the classic models that were designed just after World War Two and were made until 1964. He just loves this car! He has always called it ‘The Old Gentleman!’

Being registered in May 1963, it is about to celebrate its 40th birthday!

In September 2002, Earl Okin performed a cabaret for MG-Rover. This was the company once again in British hands after being sold back from the German company that had bought it, kept the Land-Rover and new Mini (designed in the UK, by the way), but had no use for the other marks.

Naturally, he made some jokes comparing the current Rover cars and his own classic 1963 Rover 95. His car was much better, he claimed. “After all, it weighs over 1.5 tons, has a proper H-section steel chassis and a starting handle!”. (US translation-‘crank’).

Well, they absolutely loved the show and wanted him to perform again for them. They asked him about his car and what condition it was in. Earl explained that, although mechanically sound, the bodywork really needed attention. It could do with some welding and certainly a re-spray!

For some time, the rear nearside door had not opened.

The reason turned out to be the bottom of the door column was completly rusted solid.

“Well”, they replied. “We have a body-shop and a paint-shop. If we make your car look like new, would you do a show for us?” This was too good an offer to refuse and Earl accepted with gratitude!

Late November 2002, Earl was setting off for a 3-week segment of a European tour, so he drove up to Birmingham and left his car, expecting it to be done by the time he returned. Three weeks later, he was astonished to learn that they had hardly started. Yes, the doors were off and they were looking at the structure, but there was a lot of work to be done!!!

Just one example was that about two gallons of water had got inside the chassis! . “We’re not Bodge-It and Scarper”, they told him. ‘We are Rover!!! We do things properly. This will take another 12 weeks at least”.

Earl had known that the doors had rotted, but he had had no idea just how much welding was going to be necessary. He was both surprized and grateful. However, there was a problem. “This is wonderful, of-course”, he said, “But how am I going to get to my shows in the meantime?”

“Oh!” was the reply, “That’s no problem”. “We’ve got lots of cars here. Borrow one of ours”. Earl took the train to Birmingham and was soon driving back to London in a spanking brand new navy-blue top-of-the-range ROVER 75, complete with satellite navigation system, TV (which only works when the handbrake is on!) and an interior smothered in wood panelling! He drove this car from mid December until mid-February, when he was finally told that his car was ready. 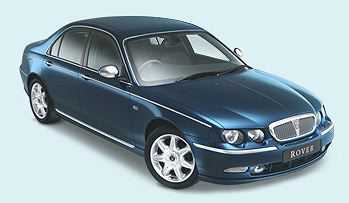 This is the NEW Rover 75 that Earl was driving throughout that December and January!

Earl had had the car re-sprayed when he first bought it in 1992, the colour-scheme being a very dignified two-tone grey. However, the paint used was not of high quality, he now realized. He was expecting a car in the same colours, the sort of car that Churchill would have been proud to be driven in around 1960. What he saw when he arrived was more the car that somebody like Douglas Fairbanks Jr. might have driven around in Hollywood in the 1950s!!!

The car was now a very shiny silver-grey on top and a very luminous navy-blue below. 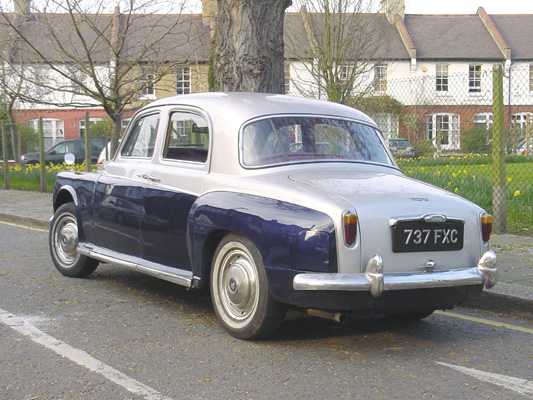 Here’s the car as it is now, though perhaps these pictures don’t give the full impression of just how brightly it shines and dominates the street.

The tyres were now white-walled and, as a surprize, MG-Rover had found someone who remembered old upholstery techniques and completely refurbished the interior, replacing the red leather, which had pretty much dried out and was falling to bits……but in a rich maroon-purple velour! Very sexy! 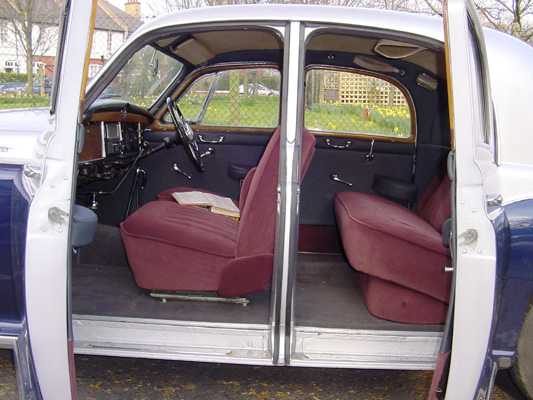 And here you see that velour interior.

Ladies…care for a ride with Earl!!!?

As Earl says, people in Glasgow, 400 miles away, are now having to wear sunglasses without knowning why. It’s just the shine from his Rover 95.

Naturally, Earl is very proud of his car and very grateful to MG-Rover!

The men who were responsible for this amazing transformation worked on Earl’s car only when they had no normal work to do…as a special project. I believe that they enjoyed doing so, despite the hard work. Let’s hope so, anyway. They should be very proud of the result…and a BIG thank-you to you all from Earl!

Oh yes! A SPECIAL thankyou to Chris Bowen, Kim Johnson, Joanne Archer and Malcolm Higgs, the people at MG-Rover who made all of this possible!

The UK government would not help them in their hour of need.

However, Earl’s magnificent ROVER 95 will continue to remind everyone of ROVER’s glory days.