Earl was first seen in Australia in the 1980s on a TV talk-show broadcast direct from London and hosted by Sir David Frost, sharing the limelight with such legends as Morecambe & Wise and George Cole, but he first performed in Australia itself around 1990, appearing in successive years for a 6-week wildly successful season at Melbourne’s Last Laugh, as well as being seen on all the top TV-shows of the time, including ‘Steve Vizard’, ‘Hey! Hey! It’s saturday’, ‘The Big Gig’ and even managing to cause mayhem on ‘Perfect Match’.

Later in the early 90s, Earl presented his full show at such prestigious venues as the still-missed wonderful restaurant-theatre, Mietta’s of Me;lbourne, performed as a Jazz-artist at Sydney’s oddly named Jazz venue, The Real Ale Cafe, and even appeared at the Adelaide Festival Fringe. He also took the opportunity while ‘down-under’ of appearing for the only time so far, in New Zealand and the write up he was given after his show at the Wellington Festival can be seen by returning to the main page nad clicking on the relevant link.

As a result of his Australian connections, he was asked to perform as a Jazz-singer at the Australian Embassy in Moscow, so far his only chance to perform in Russia.

However, Earl managed to participate twice in the Hong Kong Festival before that island ceased to be British, the last time just months before its being turned over to China in 1997.

In 2000, however, Earl was a big hit with the audiences that thronged to his shows at the new comedy festival in Singapore, taking great care not to chew gum or drop litter anywhere in the ex-British Colony.

Earl was thrilled that his venue was the Jubilee Hall within the walls of the legendary Raffles Hotel and, yes, he did partake of the odd Singapore Sling at the Long Bar. 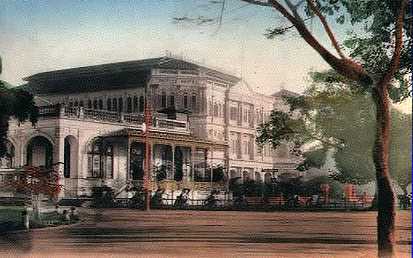 Raffles Hotel as it was in 1910. Although now surrounded by busy streets, the hotel itself is largely as it was and suggests that the sun never in fact set on the British Empire. Naturally, therefore, in his spats and cravat, Earl felt completely at home. Indeed, Earl was as impressed with Singapore as Singapore was with Earl!

In April 2005, Earl returned both to Singapore and Australia, where he enjoyed wonderful receptions from both comedy and Jazz audiences and also was a big hit on two Australian TV shows…the rugby League version of The Footy Show and the comedy music-quiz programme, Spicks And Specks. Since then Earl has returned a couple of times to Singapore and India and is currently searching for representation in Australia to build on his past successes there.