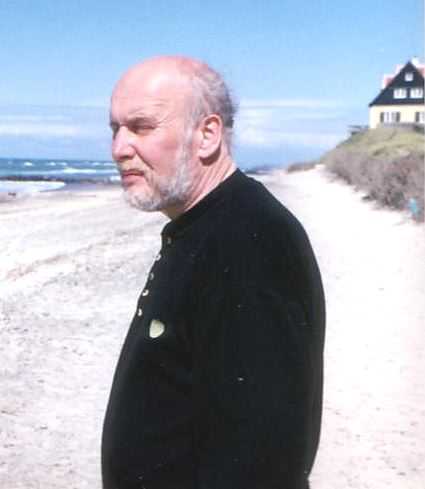 This recent portrait of John, shows him in Skagen.

He loved the sea and he loved Denmark, so this is a fitting way to remember him.

John B. Jones, sometimes known as ‘Jonah’ was a multi-layered person and never the person people who didn’t know him very well thought him to be. Those of us who were, all feel honoured and blessed to have been counted among his friends.

He was not brought up by his real parents, never enjoyed the best of starts in life but learnt a lot about life in the school of hard knocks. If he never enjoyed the success he deserved, he never complained about it. When things went wrong, as they always will for a promoter and agent, he always took full responsibility. Debts were always paid in full. He remained definitively and proudly ‘working class’ with all the morality that that phrase implies. As such, he was always defensive of his ‘macho’ image and the ‘pub’ culture that went with it.

As a very young man, he was in the armed forces for a while, but later worked at all sorts of jobs from plasterer and ship’s cook to professional wrestler, professional footballer (later a fine referee) and club comedian before turning to promoting and booking musicians.

He was always drawn by the Arts…music in particular. He had a special affection for the world where Folk Music (especially Celtic music), Blues and Jazz met Rock ‘n’ Roll and soon began running what John made just about the most successful London-pub music venue of the 1970s, The Half Moon, Putney.

That is when and where I first met and performed for him, almost 30 years ago, despite initial mutual suspicion (now that’s a funny story!).

John was at that time often mistrustful of anyone who spoke with a middle or upper class accent (he mellowed considerably, later) and felt that they were looking down on his cockney accent.

However, we soon got over that little hurdle and, without any contract needing to be signed, he became my ipso-facto manager. He was a hard-working manager/agent, getting me folk-club tours and building my ‘profile’, often coming on the road with me to make sure that things went the way they should.

I already knew that he was a first rate lighting and sound man, but
I soon discovered that he was also the perfect travelling companion. We shared a similar sense of humour and I discovered the many layered personality behind the facade. We were the unltimate odd-couple….he in T-shirt, bomber jacket and jeans and me in 3-piece suit and spats.

Nobody would believe that he enjoyed driving up the M1 with me listening to cassettes of Caruso singing opera, but it was certainly true!

John soon had me opening for major Folk acts of the day, such as Ralph McTell and Fairport Convention and getting me put on major folk Festivals, such as Cambridge and the annual Sligo Festival. From there, it was but a short step to opening for Rock acts such as Van Morrisson, but I wouldn’t give up my day-job as deputy-headmaster (which I hated, by the way), for fear of not being able to have a regular income and this frustrated him getting me a lot more tour work.

However, when he obtained for me the tour as opening-act for Wings, I could hardly refuse and resigned my post to become a full-time ‘pro.’ in November 1979, largely due to John’s negotiations, even if Harvey Goldsmith, seeing the way we were dressed, got us the wrong way round…

He thought that I was the manager and John the artiste! 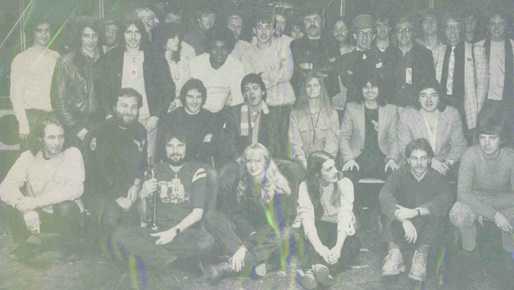 Above, is a rather poor quality picture taken from a newspaper. We are both in the back row. John is standing behind an American with the Afro. hair-do who played trumpet on the tour. John is just behind him, his face partially obscured. I’m further along, sporting a bowler hat.

He was plain fun to be with and in all the time we spent together, I can remember no serious argument throughout all the years I knew him.

During the 1980s, when I got involved with the Comedy world and the Folk circuit died away, John no longer really had the contacts that I needed, but he was always there, as a friend to talk things through and there was nobody I trusted more to help me decide where my career ought to go next. Now and then he got work for me, often abroad, and I always looked forward to a few days on the road with him…

John loved the theatre in all its forms but probably Pantomime best of all. He worked for years at The Wimbledon Theatre, helping it function in all sorts of capacities, even though they didn’t always recognize his services as perhaps they should have…

I like to think that I helped him realize just how plain good at his job he was, but sadly, I was never able to convince him to cut down seriously on his drinking (incidentally, he was never a drunk, despite the image that strangers liked to draw of him and only had a drink at appropriate times, such as AFTER gigs) and, even more so, his smoking! He did cut down the alcohol intake to a large extent after being diagnozed with Diabetes, but he never could quit tobacco.

I’m sure that these helped bring on the Diabetes and deprived his body of defense against the infection that finally did for him in December 2003, FAR too young.

He was a multifaceted and multi-talented man with a great personality with even greater sense of humour. He touched many lives and always for the better. It was only with his OWN life that he was perhaps too careless. It seems unbelievable that I shall never speak to him again. He died far too young. He wasn’t even 60yo.

As was said many years ago about somebody far more famous, let me wish him farewell with the words…

‘John Bernard Jones died this week. I don’t have to believe it if I don’t want to’…